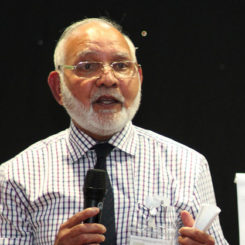 ITV looks at the work accomplished by MIAT regarding the Nepal disasters.

Mr Mohammed Aslam (born 1940 in Khanyra Sharif, a village near Dadyal, Azad Kashmir, Pakistan). His drive to succeed transferred him from being a factory worker (10 years), a bus driver (17 years), to running a family owned grocery business (Khawaja Superstore) in Walsall for 27 years and finally retiring in year 2000 at the age 60 to concentrate on a personal challenge of helping the unfortunate both here in England and abroad. At the age of 77yrs he still has the same enthusiasm and passion for the unfortunate such as traveling to Lesbos in Greece to help the Syrian refugees in February 2016!.

Ever since arriving in England, Mr Aslam was looked upon as a natural leader with a flair for working with the community, a person never too busy to assist – especially migrants from the Indian subcontinent, who were going through a difficult period adjusting to a new way of life. He helped them come to terms with the demands of bureaucracy – from filling tax forms to helping anyone in desperate need. In early years he would be seen regularly riding his bicycle during the lunch hour to meet people when there was no personal benefit, other than gratification for grabbing the opportunity to help others, whenever he could. His most treasured memory was to have helped ‘recently’ arrived migrant Pakistani children enroll into local schools and to have setup a cricket team to help integrate with local children.

Some of his local achievements are highlighted hereunder:

Two of the most notable achievements relate to enhancing facilities offered by Manor Hospital NHS Trust:

Since 1992 he has focused his efforts on International humanitarian aid. To ensure that there are no overheads, he has undertaken over 70 journeys to various countries abroad, and stayed away from the UK for over 3 years in total to distribute the money/aid that was entrusted to him. This drive to maximise value of donations, earned him the respect he deserves and allowed him to establish various networks – the most notable one being his meeting up with Professor Gatrad in 1992. A fund raising partnership that began with provision of Braille machine in Bosnia and Kosovo led to providing food, water pumps, shelter and medicine to various parts of the world devastated by floods and earthquakes over the subsequent years. With strategic planning by Professor Gatrad, he has continued to travel and oversee activities in a number of countries, including Bosnia, Kosovo, Slovenia, Croatia, Albania, Afghanistan, India, Bangladesh, Pakistan, Malawi, Haiti, Indonesia and South Africa, Nepal, Greece etc.
At a more personal level, he has sponsored 76 mass weddings (54 in Pakistan and 22 in India), respecting local customs, by providing dowries as appropriate and facilitating catering arrangements for wedding receptions etc.

As a founder of the Midland International Aid Trust he continues to be instrumental in overseeing dozens of eye camps, with hundreds of children and adults benefiting from life changing operations in countries such as South Africa, Pakistan and India.
Through networking, a partnership was created with the Pakistan Cleft Lip and Palate Association and some renowned plastic surgeons from the UK, such as Nick Hart.

Mr Aslam (MBE) has also initiated ‘job opportunity projects’ in Pakistan which provide skill based training such as making ‘breeze blocks’ for the house building industry. This has given long term sustainable paid jobs to hitherto unskilled laborers.
More recently (2010), in addition to the ongoing global humanitarian efforts, Mr Aslam has set up and opened the “Midland School” in an area devastated by the floods in Pakistan. In November 2010, Mr Aslam oversaw successful launch of Trust’s most ambitious programme in Durban, South Africa to provide 22 heart operations to African children at Albert Luthili Hospital and 20 eye cataract operations at St. Aidans Mission Hospital. The project was headed by the world renowned cardiologist, Dr Giovanni, a close friend and colleague of the Trust’s Chief executive, Professor Gatrad.

For his altruistic work Mr Aslam has received many local, national and international awards. Notable amongst them are:

Over the years Mr Mohammed Aslam (MBE) has had tremendous support from his wife, 3 sons, 3 daughters, 9 grandchildren and 3 great grandchildren who have helped and inspired him to do his local, national and international charitable work. Without such support, the nation which deservedly honoured him with MBE would have been deprived of his charitable potential. A truly remarkable man continues his work with determination at the age 77.